Directions : A statement followed by two assumptions I & II is given. Which one of the four given alternatives is correct ?

Statement : Imprisonment for 27 years made Nelson Mandela The President.

2. From the given alternative words, select the word which cannot be formed using the letters of the given word.

6. If’PAPER’ is written as’OZODQ’, how ‘PENCIL’ can be written in that code ?

8. Rajiv is the brother of Atul. Sonia is the sister of Sunil. Atul is the son of Sonia. How is Rajiv related to Sonia ?

13. A man starts from a point, walks 2 km towards north, turns towards his right and walks 2 km, turns right again and walks. What is the direction now he is facing ?

Directions: Study the two different positions of a cube given below with dots from 1 to 6 marked on its faces. When 3 is at the bottom, what will be at the top ?

15. The maximum number of squares in the given figure is:

16. Which one of the following figures represents family, sons and daughters ?

17. Which number is in all the geometerical figure?

18. Which on of the answer figures shall complete the given question figure: 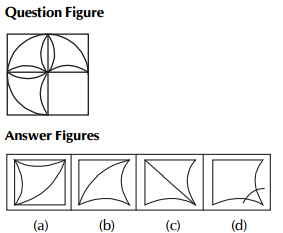 19. From the given answer figures, select the one in which the question figure is hidden embedded. 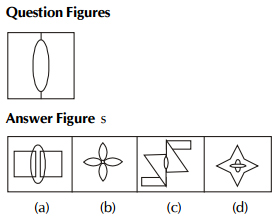 Direction: In question no 20, a piece of paper is folded and punched as shown below. From the given responses indicate how it will appear when opened.

Directions (21-25): In the following questions select the related letters/ word / number/figure from the given alternatives.