Directions (Q. Nos. 1-4) Select the related letters/ words / numbers from the given alternatives.

6. Which one of the given response would be a meaningful order of the following?

Directions (Q. Nos. 7 and 8) Which one set of letters when sequentially placed at the gaps in the given letter series shall complete it?

Directions (Q. Nos. 9-13) Find the odd word/number/number-pair from the given alternatives.

Directions (Q. Nos, 14-18) A series is given, with one term missing. Choose the correct alternative from the given ones that will complete the series.

20. A man showed a boy next to him and said “He is the son of my wife’s sister-in-law but I am the only child of my parents.” How is my son related to him?

21. Find the correct group of signs to solve the equation.

22. Sunil is the son of Kesav. Simran, Kesav’s sister, has a son Maruti and daughter Sita. Prem is the maternal uncle of Maruti. How is Sunil related to Maruti?

Directions (Q. Nos. 23-25) From the given alternatives, select the word which cannot be formed using the letters of the given word.

26. If each of the letters in the English alphabet is assigned an even numerical value by giving A = 2,
B = 4 and so on, what would be the total value of the letters for the word ‘LADY’ when similarly coded?

28. If the first and second letters in the word ‘COMMUNICATIONS’ were interchanged, also the third and the fourth letters, the fifth and sixth letters and so on, which letter would be the tenth letter counting from your right?

29. Which of the following interchanges of numbers would make the given equation correct?

30. Put the correct mathematical signs in the following equation from the given alternatives.

31. Select the correct combination of mathematical signs to replace * signs and to balance the given equation.

Directions (Q. Nos. 32-34) Select the missing number from the given responses.

Directions (Q. Nos. 37 and 38) One /I two statements are given, followed by two / three conclusions I, II and III. You have to consider the statements to be true even if they seem to be at variance from commonly known facts. You have to decide which of the given conclusions, if any, follow from the given statements.

Conclusions
I. Healthy people do not need medicine.
II. People keep medicine in their home.

39. There is a ball and a rectangular jar. Four positions are shown below to keep then balanced. Which of the following will not be balanced easily? 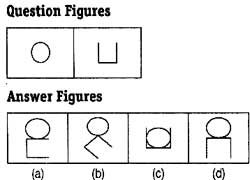 40. Which one of the four boxes given below is created by folding the given key design in the question figure? 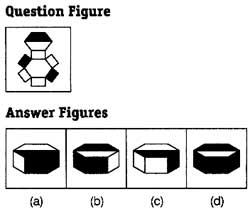 41. How many cubes are there in the group? 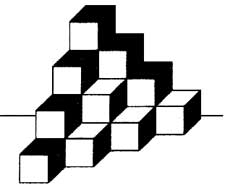 42. Which one of the following diagrams best depicts the relationship among Earth, Sea and Sun? 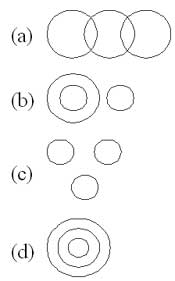 43. Read the figure and find the region representing persons who are educated and employed but not confirmed.

Directions (Q. Nos. 45 and 46) In these questions which answer figures will complete the pattern in the question figure? 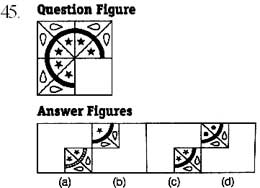 47. Which of the answer figures includes the separate components found in the question figure? 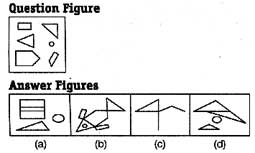 48. A piece of paper is folded and punched as shown below in the question figures. From the given answer figures, indicate how it will appear when opened.

49. Choose the right water image of the question figure from the given answer figures. 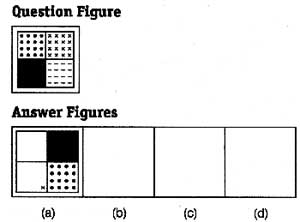 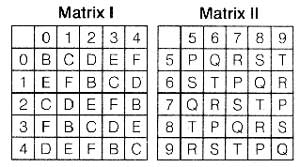