2. A group of friends are sitting in an arrangement one each at the corner of an octagon. All are facing the centre. Mahima is sitting. diagonally opposite Rama, who is on Sushma’s right. Ravi is next to Sushma and opposite Girdhar, who is on Chandra’s left. Savitri is not on Mahima’s right but opposite Shalini. Who is on Shalini’s right?

Directions (4 - 11) : In each of the following questions, select the related word/letters/ number/ figure from the given alternatives.

Directions (12-18): In each of the following questions field the odd word/letters/number/figure from the given responses.

20. Which one of the given responses would be a meaningful order of the following words ? A. Family B. Community C. Member D. Locality E. Country

21. Arrange the following words ac­cording to the dictionary:

22. Which set of letters when sequentially placed at the gaps in the given letter series shall complete it ?
_a_aaaba_ ba ab

Directions (23-27): In each of the following questions, find the missing number /letters/figure from the given responses :

30. If the day, after tomorrow is Sunday, what day was tomorrow’s day before yesterday ?

31. A man is 3 years older than his wife and four times as old as his son. If the son becomes 15 years old after 3 years, what is the present age of the wife ?

33. Suresh is 7 ranks ahead of Ashok in the class of 39 students. If Ashok’s rank is 17th from the last, what is Suresh’s rank from the start?

35. A group of alphabets are given with each being assigned a numerical code. These have to be unscrambled into a meaningful word and the correct code so obtained may be indicated from the given responses ?

36. A statement is given followed by two assumptions, (a) and (b). You have to consider the statement to be true, even if it seems to be at variance from commonly known facts. You are to decide which of the given assumptions can definitely be drawn from the given statement. Indicate your answer.

Statement: Theoretical education does not bring in economic advancement and it lends to a steady loss of confidence and money in the country.

37. Two statements are given followed by four conclusions, I, II, III and IV. You have to consider the statements to be true, even if they seem to be at variance from commonly known facts. You are to decide which of the given conclusions can definitely be drawn from the given statements. Indicate your answer.

Statements:
(A) No cow is a chair.
(B) All chairs are tables.

39. In a certain code SISTER is written as RHRSDQ. How is UNCLE written in that code?

42. After interchanging ÷ and =, 2 and 3 which one of the following statements becomes correct ?

Which set of symbols can replace * ?

44. Find the missing number from the given responses

46. Choose the correct figure that represents the given relation : Blue eyed, females, doctors

47. Among the four answer figures, which figure can be formed from the cutpieces given below in the question figure ? 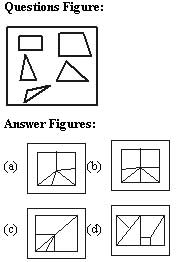 48. If the mirror is placed on the line LM, then which of the answer figures is the right image of the given question figure ?

49. How many triangles are there it the following figure ?

50. From the given answer figures, select the one in which the question figure is hidden/embedded.